See you all next year!!!

CONGRATULATIONS  – DAMIEN LEONARD – WINNER MARCH SHOOTOUT
In the 9 hole stableford, Gary Broadbent was the top qualifier with 20 points, followed by Ned Heath on 19, then six players on 18 points
with Renata Nankivell and Brett Prior unluckily missing out on a countback.

A large crowd of players, partners and kids gathered in the balcony enjoying the BBQ put on by the Social Committee and readied for the entertainment coming up on the 9th green.
Brad Singler has his sound system up and running and the atmosphere was terrific.
If you haven’t played in or been to a Sunday Shoot-out you really need to get along for a great afternoon.

Five of the players teed off from the 90M Blue Tees.  Gary Broadbent was then entitled to hit off from the 70M white tees (due to his 19+ handicap) but he declined this advantage and also hit from the blues.

Playoff Hole 1 – Sean McInerney and Gary Broadbent couldn’t get a par after missing the green and dropped out.  No-one managed a birdie so the 4 par players continued.

Playoff Hole 2 – Ned Heath’s drive was in a horrible position near the back wall of the bunker, leading to his downfall.   A couple of birdie opportunities were missed and 3 par players continued.

Playoff Hole 3 – Russell Godson’s drive was just short of the green and his put on to the green was a bit short, resulting in a bogey.  Damien Leonard and Maurice Ahpene managed to get their pars and continued.

Playoff Hole 4 – Damien Leonard and Maurice Ahpene both hit to the green.
Before they putted, the MC Ken Godson asked the players if they wanted to share the prize as joint winners if there was no result on this hole.
The crowd yelled “one more . . one more” and the players agreed.
Both players made par and went back to the tees for the final playoff hole.

Playoff Hole 5 – Damien Leonard continued his amazing accuracy at the pin and put his drive  on the green 4 metres from the hole.
Maurice Ahpene missed the green and he knew he had to get his 20M chip and run close to have a chance at a par.
Unfortunately Maurice went about 5M past the pin and his put back missed, resulting in a bogey.
Damien was now in the box seat, putting his birdie put close for an easy par to win the competition.
Damien had hit 5 very solid pars in a row in the playoffs to win, a great effort. 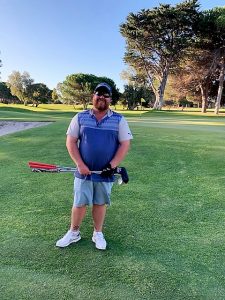 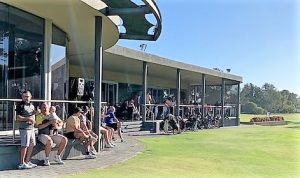 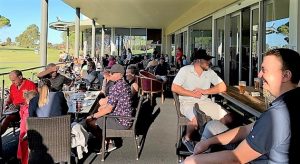 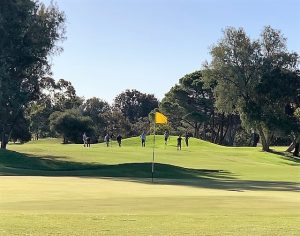 Shoot out from the 100 meter mark

February Winner – Ray Curtis
A Birdie Putt from off the Green 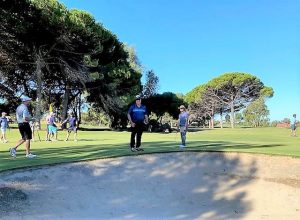 a putt from the shade off the green to win 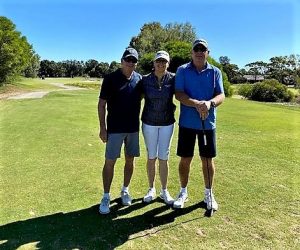 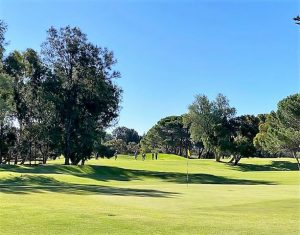 Super 6 qualifiers from the 100mtr mark 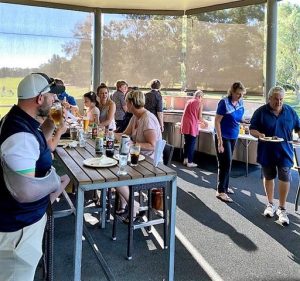 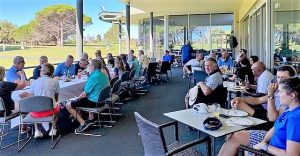 Veranda was full of spectators